Sam Adams grew up in Auburn and dreamed of one day living in Germany. Years later and almost 5,000 miles away from the Plains, he’s fulfilling that dream through the Building Lasting Bridges project.

“Building Lasting Bridges: German and Engineering at Auburn University” is a partnership between the Department of World Languages, Literatures and Cultures in the College of Liberal Arts and the College of Engineering that provides students an opportunity to study, live and work in Germany.

For Adams, a junior double-majoring in computer science and German, it was a perfect opportunity.

“This has cemented my view of Germany. It really lived up to my expectations and more,” Adams said. “Some of my favorite memories have been going on day trips to other towns, cities, festivals and just being able to see everything that Germany has to offer. Being able to speak German has also helped me to immerse myself more in the culture and make friends.”

The Building Lasting Bridges project expands on the interdisciplinary work of Auburn’s dual degree program in German and engineering. The project also introduced intercultural learning outcomes to a pre-engineering course, which educates hundreds of students each year in technical and cultural knowledge. 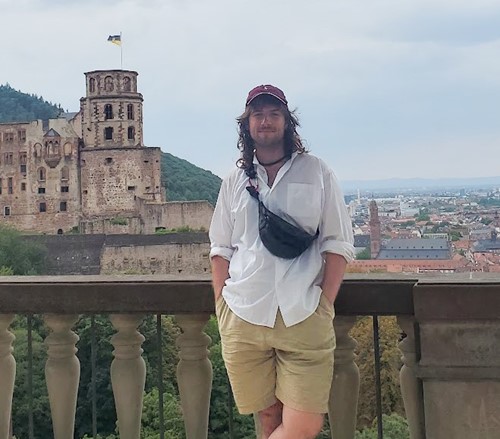 Being able to speak German has helped me to immerse myself more in the culture and make friends. ~ Sam Adams
Junior, Computer Science and German

The developmental courses in the project are followed by a semester of study abroad and an internship abroad. Adams departed in March, and until the end of July, studied at Aalen University, just west of Stuttgart. He said his German language credentials have made adjusting to life abroad much easier.

“I’m really glad that I’m actually able to speak the language and read and understand because it’s way easier to navigate,” Adams said. “People respond to you better and it makes you able to connect with Germans better because it’s their mother language.”

The final part of the program is a semester-long internship abroad. Adams works as a software engineer at camLine, a small software company in Dresden, where he writes tests to ensure the quality of the company’s products.

“Because I’ve worked in an international environment, I think that will help me become a more competitive job candidate,” Adams said. “I’ve worked in an engineering environment where not everyone speaks clear English. So, I think that could be really advantageous for me, especially when a company sees that if I can work in an international team, then I could work in any team.”

The German-engineering dual degree program was introduced in 2019, and two years later, the Building Lasting Bridges project received grant funding from the National Endowment for the Humanities, or NEH. The NEH “supports research and learning in history, literature, philosophy and other areas of the humanities.” The grant supports the project’s five developmental courses and its year abroad requirement.

Department of World Languages, Literature and Cultures Chair Traci O’Brien said for at least two decades, engineers have made up a large percentage of the department’s German language minors.

“Perhaps we can say that there is a natural affinity between engineers and German–perhaps German is just another interesting problem to solve,” O’Brien said. “More likely, however, is the number of German companies in the southeastern U.S. The automotive industry has taken root in the region with first- and second-tier manufacturing plants spread throughout the state.”

“The benefits of such a program and experiences are enormous,” Hendrix said. “Students finish their degrees with advanced-level skills in technical proficiency and they will have also learned how to speak, analyze, problem-solve and act in cross-cultural situations. Such graduates will build better bridges, both literally and figuratively.”

Beyond building engineering and language skills, junior Sam Adams has enjoyed the opportunity to attend festivals, see historic sights and immerse himself in German culture through the project.

Adams advises interested students to keep an open mind and consider participating in the program for its many benefits and eye-opening experiences.

“It’s been one of the best experiences I’ve ever had and the most eventful year of my entire life,” Adams said. “It has changed how I view myself, different cultures, working, basically everything. I would recommend that if anyone has the chance to do a program like this to take it.”