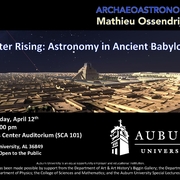 Dr. Mathieu Ossendrijver, an internationally renowned archaeoastronomer, has long studied how the people of the ancient Near East understood and tracked the movements of the stars and planets. A gifted and accessible lecturer, skilled in making complex topics accessible to the general public, he has been invited to Auburn University to speak on “Jupiter Rising: Astronomy in Ancient Babylonia,” on Wednesday, April 12, 2017. The lecture, which will be held at 5:00 p.m. in the Sciences Center Auditorium (SCA 101), will be followed by a Q & A session and is free and open to the public. The lecture is sponsored by the Department of Art & Art History's Biggin Gallery; the Department of History; the Department of Physics; the College of Sciences and Mathematics; and the Auburn University Special Lectures Program.

Dr. Ossendrijver received his PhD in astrophysics at the University of Utrecht in the Netherlands and his PhD in Assyriology at the University of Tübingen in Germany. Currently Professor of the History of Ancient Science at the Humboldt University in Berlin, he ​specializes in Babylonian mathematical astronomy. He is responsible for the extremely important discovery, through his work on four Babylonian cuneiform tablets, that the ancient Babylonian astronomers employed unexpectedly sophisticated mathematical techniques to track the movements of Jupiter (cover article for Science, 29 Jan. 2016). He is also the author of Babylonian Mathematical Astronomy: Procedure Texts (Springer 2012) and numerous other works on the history of science.​