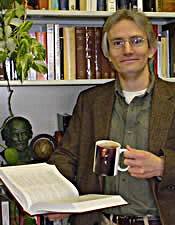 Dr. Craig E. Bertolet’s essay, “Jests, Jokes, Pranks, and Play in Chaucer’s Cook’s Tale,” has appeared in the Open-Access Companion to the Canterbury Tales. This on-line resource is targeted to beginning students of the Canterbury Tales at the high school or college level who want different lenses with which to read Chaucer’s Tales.  Bertolet’s article discusses how the Cook’s Tale speaks to a tradition of trickster stories that pit an apprentice against his master. In these trickster stories, the person tricked often deserves it because of an intellectual or moral flaw. In the Cook’s Tale, Chaucer inverts this tradition since the shopkeeper does not deserve the tricks his apprentice plays on him. Chaucer’s Cook places his story in the City of London, which had clear rules for how apprentices and their masters should behave and how honest trade should be conducted. What Chaucer shows in his tale is that play needed to be regulated or people would get hurt. It is Craig’s fourth publication to appear this year.  Dr. Craig E. Bertolet is Professor of Medieval Literature, Cultural Studies, Chaucer, and Critical Theory & Cultural Studies.  Congrats, Craig!

The article can be accessed at: https://opencanterburytales.dsl.lsu.edu/ckt1/