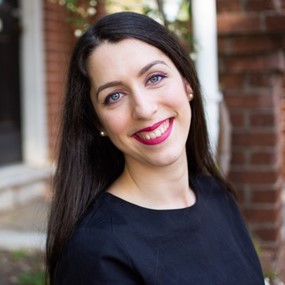 Maria Margiolakou is a Greek coloratura soprano currently based in Atlanta. She has numerous performance credits across Europe and North America, including roles such as Lauretta (Gianni Schicchi) and Cherubino (Le nozze di Figaro) with Greve Opera Academy in Italy. With the Georgia State University Opera Theater, Maria portrayed roles such as Lucy (The Telephone), Cercatrice (Suor Angelica), Joan Hall (The Workshop), and Cissy (Albert Herring), as well as originating the role of Robin in the world premiere of Milton Granger's “Don’t You Know”. Her performance experiences include the roles of Euridice (Orfeo ed Euridice) and Amour (Daphnis et Eglé), as well as Barbarina (Le nozze di Figaro) and Nerone (L’incoronazione di Poppea) at the Lefkas Summer Festival in Greece. As a soloist, she has collaborated with the University of Macedonia Symphony Orchestra and the Drama State Conservatory Symphony Orchestra in Fauré’s Requiem in D minor.  Maria has been a finalist in the GSU Honors Competition, a winner of the GSU Brumby Concerto and Aria Competition, as well as a recipient of the Peter Harrower Award. Recently, she has performed with the Connecticut Lyric Opera, in the roles of Musetta (La Bohème) and Adele (Die Fledermaus). She will be singing the part of Frasquita with the Opera Theater of Connecticut in Bizet’s “Carmen" in fall 2022.

Maria holds a B.Mus. in Music from the University of Macedonia as well as a Master of Music and an Artist Certificate in Vocal Performance from Georgia State University, where she studied with Dwight Coleman. In addition, she has participated in masterclasses with Stephanie Blythe, Katia Ricciarelli, Cheryl Studer and others. One of her great interests is the “Alexander Technique for Musicians,” a technique focused on the improvement of the body's movement while playing music.